While looking recently for sample charts to be used in my astrology classes, I explored a database of artists, musicians, and creative sorts in general. I was drawn to the charts of Leonardo da Vinci and Johann Sebastian Bach. It was my intention to do a study of the charts separately, but while doing so, discovered that some themes seemed to be common between the two charts. “Innovation, structure, beauty” were the words I had jotted down.

In the charts of artists of all types, there are some classic chart signatures we might expect to see. The imagination of Neptune and the aesthetics of Venus are likely prominent in the chart. The Sun for creativity, Mercury for craftsmanship, would probably play important roles as well. The self-expressive 5th House and the imaginative 12th House would likely be featured.  No doubt the Venus-ruled signs of Taurus and Libra, along with the exaltation in Pisces, might be emphasized. Leo, the sign of creativity, could be brought forward. Let’s call these things The Artist Checklist.

Sure enough, the charts of da Vinci and Bach met several of those “requirements”. Yet I was surprised by something else. Uranus, Aquarius, and the 11th house had their calling, too. After thinking about it, it made sense. Leonardo da Vinci was famous for his inventions as well as his art, and Bach helped pioneer and reform the tuning system of his day. The were both very progressive individuals in their own right. Let’s call the Uranus-Aquarius-11th stuff The Progressive Checklist.

Upon further study, the two charts each brought out an 8th house flavour, too. Perhaps this suggests their desire to explore depth of feeling, and to be intensely thorough in all aspects of their work. Let’s call the 8th House (and Pluto) connections The Transformative Checklist. 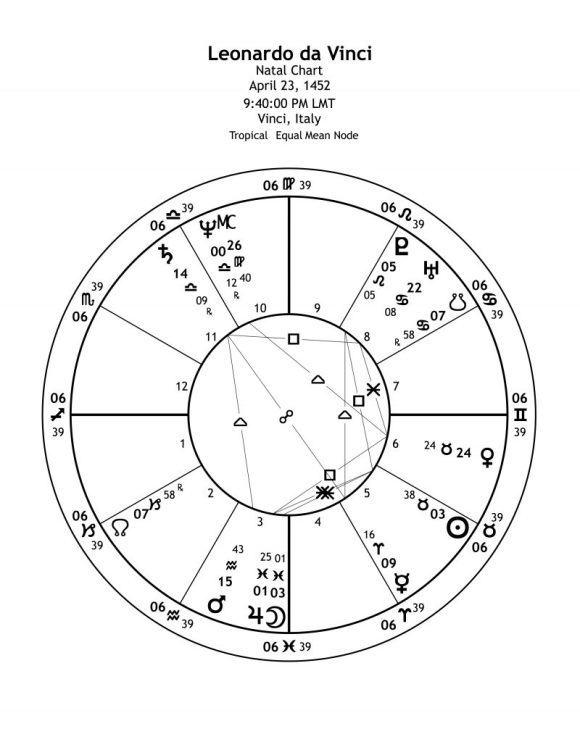 Let’s look at da Vinci’s chart first. He meets several factors of The ArtistChecklist. Neptune conjunct the Midheaven offers the potential that he is known for something to do with creativity and imagination. The MC trines Venus in Taurus, suggesting a very physical expression of beauty and art. The 6th house placement of Venus gives rise to the fact that this beauty of proportion is likely to show up in everyday items — something we will notice in da Vinci’s many inventions. The Sun, as well as MC ruler, Mercury, are placed in the 5th house of creativity. The MC ruler aspects Saturn, exalted in Libra, giving us further information that this manner of expression is linked with form, structure, proportion, and balance. Sun in Taurus in sextile to Moon in Pisces is a simple astrological statement of the physical world being linked with the emotional, artistic realm.

Now let’s bring in the Progressive factors. The MC aspecting Venus brings a connection to the 11th house since Venus is ruler of that house. Here we can see that da Vinci would be known for his work in bettering humanity, and in his case, in inventing and improving things in the name of progress. As well as making improvements on the mechanics of clocks (how very Saturn in the 11th), he had many sketches and plans for devices that would allow humans to fly — and this is back in the 1500’s! He even had plans for the ideal city — notice Neptune (the ideal) trining the 11th house ruler (community) — involving architectural beauty (Saturn in Libra) and plans for water systems that would help people maintain better health. That 6th-house Venus in Taurus aspects Uranus; there can be something unconventional about his creations, or something that “breaks the mould”.

As for the Transformative list, da Vinci’s chart has a number of connections to the 8th house and Pluto. Jupiter, the Ascendant Ruler, is conjunct the Ruler of the 8th (the Moon). The Sun sextiles that same 8th-house Ruler, and in addition, squares Pluto in the 8th. That strong Saturn in Libra squares Uranus in the 8th — suggesting frequent dialogue between the old and the new. Mercury in the 5th is in trine with Pluto, giving his creativity of thoughts and ideas some ruthless determination to succeed. And Venus herself is linked to 8th-house Uranus. Leonardo da Vinci’s notoriety, as revealed through MC ruler Mercury in the 5th, and his art, as portrayed by Venus, have this connection to the mysterious 8th house! And what is it that we always wonder? What is behind that mystery of the Mona Lisa smile? How very 8th house!

In my next post, we’ll have a look at the chart of J.S. Bach to see how it has similar themes suggested.