During a recent interview, I mentioned that Canada would be in the spotlight in 2012. I’d like to share my astrological observations here, and I encourage you to do some thinking about this and possibly submit your comments for everyone’s consideration. 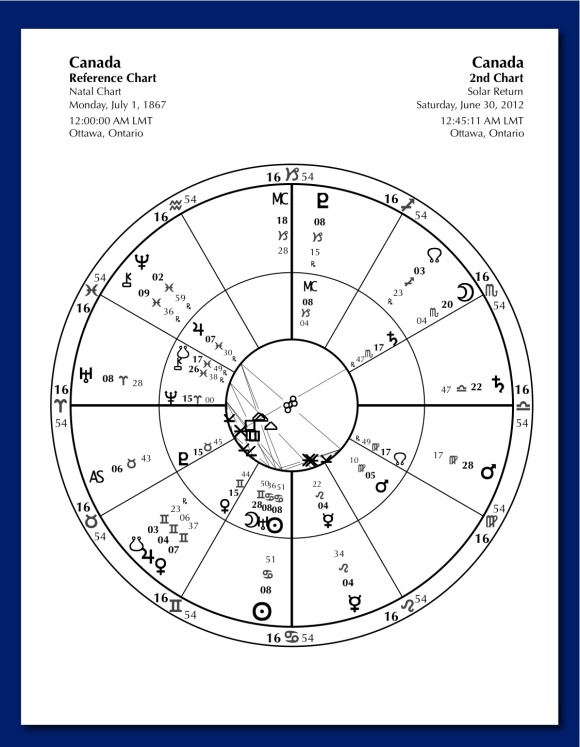 First of all, you may have heard already about the upcoming astrological event of great significance: the seven squares of Uranus and Pluto over the next three years. The square aspect refers to the two planets being 90° apart from one another as we see them against the backdrop of the Celestial Sphere. The two planets (for simplicity’s sake, I will still refer to Pluto as a planet) carry on in their orbits around the sun, yet from our perspective on Earth, there is a bit of back-and-forth motion going on as each planet shifts in and out of the perceived retrograde motion. The resulting “dance” of the two planets creates the phenomenon of the seven squares — seven times being 90° apart — from 2012 through 2015.

Both Uranus and Pluto are bringers of change — Uranus in a way that is sudden and shocking, and Pluto in a way that is deep and transformational. Perhaps “thorough” is an understatement here! In the square aspect, their energies are dynamic and they seem to rev each other up. There is certainly some strong motivation here — definitely a call to action.

The last time the planets were together or “conjunct” in the zodiac was in the mid 1960’s. At the time of conjunction, it is believed that the seeds are planted. At the time of the square, it is time to weed the garden; at the square, it is time to keep the plants that are healthy and thriving, and time to rip out those that will stilt the growth of the stronger ones if left unattended.

So how does Canada come into the picture? Actually, in quite a dramatic way.

Each birthday or anniversary for any individual, any business, any organization, or any country, presents an opportunity to cast a Solar Return chart. This astrological chart is set for the moment when the Sun returns to the position along the ecliptic that it occupied at the moment of birth. It sets the tone for the year ahead, and is the origin of the expression “many happy returns” that we often say at someone’s birthday. Canada’s Solar Return of 2012 (which represents July 1, 2012 through July 1, 2013) locks in the first impending Uranus-Pluto square in a position that could not be any more public.

Without dwelling on the astrological terminology, let me say that Canada as a nation is being called up to bat. Canada has no choice but to be a leader of change here at home and on a global level. It is time for Canada to re-evaluate her goals and ambitions, time to annihilate any of her unhealthy attitudes, and time to show a new presence to the world. Issues of power and control are certainly likely to show up, so it is important that we know exactly what we stand for and that we act with integrity.

As Canadians, we may need to re-evaluate our beliefs regarding democracy, human rights, and personal freedoms. We may need to change our thinking on the balance between own domestic affairs and our responsibility to the global community. If we are to be surprised by anything in this process, it is that our allies may have hidden intentions which clash with our own views.

Astrology also suggests that Canadians in 2012 need to reflect back on the decisions made and the actions taken in 1990. If those changes of 1990 helped Canada become more of who she really is, then 2012 will be an invigorating and liberating year. However, if something got derailed in 1990, if something wasn’t handled with integrity, if Canada took on “baggage” that is not part of who she is fundamentally, then we will need to experience some shocking readjustments in 2012-13 to get us back on track. This, then, is a year for us to be open and honest with one another, and to listen with acceptance to conflicting viewpoints, all in the spirit of striving to see the core truths of what we believe as a nation — for ourselves and for our duty to the world.

Just for sport, have a look at Wikipedia’s article, 1990 in Canada . Do you see anything that might have been dishonest, or anything done for reasons other than the good of Canada as a whole? Let’s work to prevent any repercussions this year.